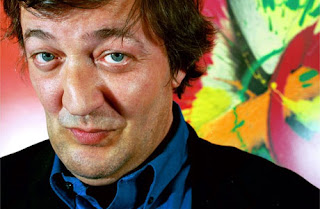 A national treasure, a comedy god, the acceptable face of Richard Dawkins; whatever you wish to call Stephen Fry there’s a weight of expectation on his one-man show. Tonight, though the library salon-style set is sumptuous, the performer exhibited more sparkle and vivacity in those tea adverts than in retelling his anecdotes.

Oversold as a Twitter-led gig, the reality is that a handful of tweeted questions are occasional markers on a mapping of Fry’s life from cheeky schoolboy to equally cheeky comedian. It’s a show that feels that it will never start or never end, bookended with a rootless and nervy introductory patter about family trees and an extended eulogy to the genius of Oscar Wilde whom Fry played. Sandwiched in between are tender and gentle anecdotes rather than uproarious yarns.

The first half’s main story is about Fry trying to get a Billy Bunter-type character to take a fall for him at school and thus avoid punishment for visiting the village shop for tuck. Paradoxically, the lure of sugary sweets is a subject that could have done with a sugar rush, ditto for a cursory flit through his pre-university teaching experiences.

Full colour is only reached in snatches including the closing of the first half where Fry reads a take on the Dracula story that he and Hugh Laurie wrote when they were in the Cambridge Footlights together. It’s Fry’s “collaborative” love affair with Laurie that most piques the interest tonight. A still shy and awed Fry, just realising that he might want to be on stage, though set to return to teaching, meets a strapping guitar-playing sportsman, Laurie, who fancies working for the Hong Kong police. The meeting changes their destinies of course, coming together for success and then flying solo to even more acclaim. As a taxi driver puts it when he picks them both up: “I love you in that IQ, Stephen, and in that Bit of Hugh and Laurie, but what’s happened to you Hugh?