The End of Friends – Again.

The End of Friends – Again. 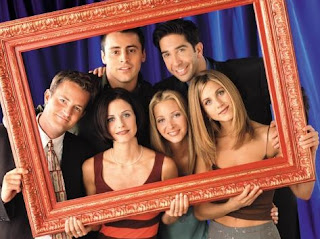 Could I have been any more gutted? At the start of September, after a 16-year run, the like, totally awesome sitcom Friends finally ended its cycle on E4 and Channel 4. Teatimes at the imaginary Central Perk of my kitchen table would never be the same again. Hello? I mean, goodbye? Was I to be left staring at the clock and scratching my head, considering finally buying the DVDs that I obviously thought I would never need?

Some may have scoffed, but I wasn’t alone. “friends is going what next???” ran one of many comments on E4’s Friends page. I knew what they meant, the country had to gone the dogs. Or to The Inbetweeners.

However, as of Saturday 1 October, Friends returns on Comedy Central and, even though I have to shift my viewing portals around a bit, from the lounge to the kitchen, normal service is resumed after what has been a difficult month.

Here are ten reasons, of many, why Friends will always be close to our hearts:

They are always there for you
In the 1990s Friends, along with Frasier, helped Channel 4 pretty much sew up Friday nights for the twenty and thirtysomething demographic. Since then the continuous repeats of Friends have earnt the show a“default viewing” status, with many of those who saw the original series adopting as part of the rhythm of their daily lives.

While the gang built their own alternative family they were also, in turn, a surrogate family for many who watched them. And there were many. Let’s do the math; the 10 seasons totaling 236 episodes, have been syndicated around the world and in the UK the show’s repeats accounted for 23 hours of E4’s programme schedule (as of February this year) and 14 hours on Channel 4, pulling in an average of over 300,000 viewers, while in its heyday on Channel 4 it pulled in an average of 5.4 million viewers (2.3m on E4), with the last ever episode in 2004 notching up 8.6 million viewers on Channel 4. This year, by way of comparison, the highest rated show on Channel 4 was their record-breaking documentary Big Fat Gypsy Weddings that had an average of 9.1m for the series meanwhile over on E4 Glee has a series average of 2.6m viewers.

The last great gathering of 20-somethings near a TV?

The US figures for big series finales make interesting reading. M*A*S*H (1972 – 1983), Cheers (1982 – 1993), Seinfeld (1989 – 1998), won 105, 80 and 76million people respectively. Friends (1994 – 2004) won 53million. The decline in the sitcom, particularly from the 90s onwards, when cable TV started fragmenting the picture as it would over here, means that Friends is likely to be on of the last occasions where 20 and 30-somethings will share a small screen happening en masse. The internet, rarely mentioned in the series, except as the cause of one of Chandler and “Jaaaanice”’s reunions, was a waking beast when Friends began and now social networking, gaming, digital TV and, er, DVD box sets have splintered those watercooler moments just in time for the invention of that very phrase.

Life and Art, Art and Life and Hair

I frequently use the phrase “That reminds me of the episode when…” as, of course, everything that happens in life has a Friends episode that echoes it. Except, perhaps, war, pestilence and wanton urban looting.

Use of such a phrase is unsurprising given that American sitcoms are like the zodiac, all personality traits and predicaments are covered. In this case there are six signs rather than twelve: Monica; the anally-retentive and competitive chef, Ross; her geeky and marriage–prone older brother, Rachel; the spoilt but sassy waitress-cum-fashionista, Joey; the dim but loveable actor and ladies man, the kooky and flaky hippy Phoebe and, of course Chandler; the court jester with an anonymous job and no real track record with women.

One of the first groups of people to notice Chandler’s attributes were the actor friends of Matthew Perry who told him they’d all been to an audition for the part of a guy exactly like him. When Perry appeared on screen as Chandler my friends remarked to me how much like him I was. I was not alone in the discovery that certain qualities, hitherto regarded as niche, had found a very public mirror.

Still not convinced of the art-life symbiosis? What about Jennifer “Poor Jen” Aniston? The former Mrs Brad Pitt recently joked that her love life is mirrored by her film titles such as ‘He’s Just Not That Into You’ but her dating track record in Friends was no picnic either. When Rachel wasn’t rebounding off Ross, she was desperately throwing herself at Josh (Tate Donovan, another real life ex) and shopping in the junior section with Tag who she eventually dumped for being too childish, an ending that arguably foretells of the demise of her relationship with musician John Mayer who she left because of his obsession with Twitter.

All this his is not to mention that hairdo of course, “The Rachel”,ordered in hair salons up and down the country as if it was some kind of follicular cocktail. The popularity of it was referred to in the series when, in the face of her mother’s desire to divorce her father and have a footloose and fancy free life like her daughter’s, Rachel protests: “Why can’t she just copy my hairstyle?”

Arrested development
Generation X never looked this good. Don’t worry about getting married, don’t worry if the number of notches on your bed post reach triple figures, don’t worry about that dream career until you’re in your thirties and whatever you do, don’t worry about digs because your grandmother has an incredible rent-controlled apartment with enough room to permanently entertain six people who will become your new family.

Ah New York, New York! Well, Burbank, California, actually. Nevertheless, these six young, hot, Manhattanites are referenced as the embodiment of Rudy Giuliani’s buffed up and sanitised Big Apple. “Before Friends,” opined the LA Times in 2004, “certain parts of New York were like exciting, if roach-infested, refuges for young, alienated, creative types seeking some sort of bohemian cultural experience. After Friends, then-New York Mayor Rudy Giuliani did what he could to make the city resemble a Warner Bros. back lot. Those parts of New York that had once been roach-infested refuges for young oddballs wound up yielding some exciting retail opportunities.”

Flaws are fun: a sitcom that got its retaliation in first

Essentially Friends were a group of nice, polite but self-obsessed and selfish Manhattanites who weren’t afraid to show their inadequacies and were quick to point out those of each other. It was survival of the fittest – and luckily enough, they were all fit. The writers were well-aware of how the sappy the group might be perceived and got their retaliation in early with a stroke of sitcom genius: the cameo character of Roger the Psychiatrist who Phoebe dates. On breaking up with Phoebe, Roger berates: “this kind of dysfunctional group dynamic…this kind of co-dependent, emotionally stunted, sitting in your stupid coffee house with your stupid big cups which, I’m sorry, might as well have nipples on them, and you’re like all ‘Oh, define me! Define me! Love me, I need love!’.”

Although it was seen as a bit of of a gimmick, Friends was awash with celebrity cameos. Tom Selleck gained a new lease of life and an Emmy nomination for the character of Richard, Monica’s cigar-smoking older boyfriend, while the fabulous Elliot Gould had a recurring role as Monica and Ross’ dad. Perhaps Gould’s most famous moment came during a row over the cost of the marriage of Ross to “British chippy” Emily (Helen Baxendale) and telling Tom Conti, Emily’s father, he was a “thieving, would-be-speaking-German-if-it-wasn’t-for-us little man.” Along with Conti, Jennifer Saunders, June Whitfield, Olivia Williams and Hugh Laurie were among some of the cameos in the episodes based in London (baby). Back home Bruce Willis, Susan Sarandon, Winona Ryder, Sean Penn, Jon Favreau and Alec Baldwin were among other well-known names enlisted to join the party. One of the best cameos came from Brad Pitt as Will, the schoolfriend of Monica and Ross who hated Rachel but who was married to Aniston at the time. One of the worst? Robin Williams and Billy Crystal who had a short scene in Central Perk as forgettable as Chandler’s job.

Along with the Crane boys in Frasier, Monica Geller was a pin up for the OCD generation; setting the rules to control the fun with an unerving capacity to be always right. Although her high-maintenance ways could drive the group doolally (especially free-spirited Phoebe), Monica pulled the strings and was often the glue that bound the Friends together. Proving that clean could be cool and sexy, Monica Geller was the 1950s housewife for the 1990s. “I’d be great in a war” she once said of her organisational ability, and it’s highly likely that she would be good in a post-riot clean-up situation too.

Language and catchphrases
As with any good comedy enduring catchphrases are a badge of achievement. Friends went further than most utilising numerous terms that would enter popular usage including:

How YOU doin’? The chat up line only guaranteed to work for Joey Tribbiani.

The incredulous and sarcastic “Hello?” used by all the gang to show frustration with each other and proving infectious to a number of young people other than valley girls.

Chandler’s signature “Could I BE any more…?” Just add your own adjective here.

Meanwhile, the use of the word “so” to replace other adverbs such as “very”and “really” was the subject of an academic study no less. Score.

With Friends ending at the same time as Frasier, in 2004, there was a panic on about the future of the genre. Studio sitcoms were looking particularly shaky, ironically because of sitcoms that used shaky or naturalistic camera techniques, both in the US and in the UK. A remake of the UK sitcom Coupling (our attempt at a carbon copy) and, more recently How I Met Your Mother, were two direct responses to the end of Friends in the US; the latter much more successful than the former that lasted one season only. Meanwhile, the spin-off Joey, where our intellectually-challenged actor friend goes off to LA, just about managed to get two seasons chalked up before being pulled.

Despite the varying degrees of success in either imitating or extending the Friends dynamic, the series has a legacy to aspire to and the idea of “the new Friends”, is still as much a shorthand for desired success as “the new Buffy” or “the new The Wire”.

And if there is no new Friends?  Well, there’s always the repeats on Comedy Central.